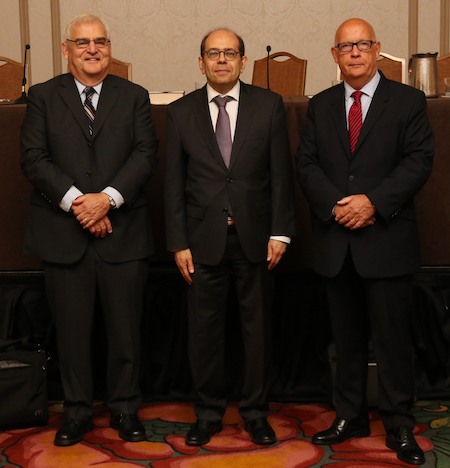 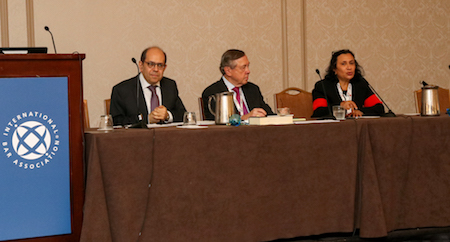 To bring the 2010 BCDR-AAA Arbitration Rules in line with best practices in arbitration, the BCDR-AAA's Board of Trustees (Board) requested a three-member Rules Review Committee (Committee), composed of Antonio R. Parra,* Adrian Winstanley** and Nassib G. Ziadé,*** to draft revised arbitration rules (Draft Rules) for the Board's consideration.

The Committee reviewed the latest rules of leading international and regional arbitral institutions, as well as the 2010 UNCITRAL Arbitration Rules, and submitted to the Board Draft Rules encompassing what the Committee considers the best standards in arbitration. The BCDR-AAA is circulating the Draft Rules to current and potential users for review and feedback, and seeking comments from interested parties by 22 November 2016.

On 20 September 2016, the BCDR-AAA hosted, on the sidelines of the 2016 Annual IBA Conference in Washington, DC, a breakfast meeting and panel discussion on the BCDR-AAA and the Draft Rules. The invitation to the breakfast meeting and panel discussion can be viewed here. Sheikha Haya Al Khalifa, Chair of the Board, and William K. Slate II, a member of the Board and the Chairman and CEO of Dispute Resolution Data LLC, co-chaired the discussion.

The three Committee members made presentations during the meeting. Professor Ziadé provided a general description of the BCDR-AAA and its main activities. He discussed the legal environment in which the BCDR-AAA operates, including the framework provided by the 2015 Bahrain legislation on arbitration, which applies the UNCITRAL Model Law on International Commercial Arbitration to both domestic and international disputes.

Under Section 1, the BCDR-AAA has jurisdiction over disputes which fall originally within the jurisdiction of Bahraini courts, where the claim exceeds US$1.3 million and at least one party is a financial institution licensed by the Central Bank of Bahrain or the dispute is of an international commercial nature. Tribunals appointed under Section 1 are composed of three members (two judges of the highest Bahraini jurisdictions and the third member chosen from the BCDR-AAA's roster of neutrals).

Professor Ziadé observed that under Section 2, the BCDR-AAA has jurisdiction over disputes referred to it by written agreement of the parties under the BCDR-AAA's Arbitration or Mediation Rules. He then introduced the Draft Rules, which would be applicable to Section 2 cases, and elaborated on two of the provisions that depart from the ICDR Arbitration Rules.

The first of these provisions relates to the appointment of arbitrators. Under the ICDR Arbitration Rules, the parties can agree upon any procedure for appointing arbitrators "with or without the assistance" of the institution. By contrast, the Arbitration Rules of the ICC, the LCIA, and the Singapore International Arbitration Centre (SIAC) provide that, while the parties may nominate arbitrators, the appointment of arbitrators is made or confirmed by the institution. The Draft Rules have adopted the latter procedure in Article 7, providing additional safeguards for arbitrator independence and impartiality.

Adrian Winstanley focused his presentation on draft provisions that depart from the ICDR Arbitration Rules. Article 3 of the Draft Rules, which deals with prima facie jurisdiction, expressly empowers the BCDR-AAA to decline to register a request for arbitration filed pursuant to a clause with no effective reference to the BCDR-AAA. This provision is intended to avoid unnecessary time and expense related to the appointment of a tribunal plainly lacking jurisdiction, while the tribunal still retains authority to rule on its own jurisdiction if jurisdiction is nonetheless challenged.

Mr. Winstanley also discussed new Articles 2 (Request for Arbitration) and 4 (Response) of the Draft Rules which amend the current filing requirements whereby an arbitration is commenced by filing a "Notice of Arbitration and Statement of Claim," in reply to which the Respondent is required to file a "Statement of Defense." By contrast, the Draft Rules incorporate a similar approach to that of the LCIA, SIAC, and the Arbitration Institute of the Stockholm Chamber of Commerce (SCC), whereby the Request for Arbitration and the Response need not fully expose the parties' positions. The parties still have ample opportunity to present and to defend their case in subsequent written submissions. This change is intended to diminish the disadvantage that Respondents may feel when required to produce a complete defense and counterclaim within a generally tight deadline after receiving the notice of arbitration, which might have taken many months to prepare.

Mr. Winstanley also discussed Article 15 of the Draft Rules (summary disposal of claims), noting that such measures already appear in the 2016 SIAC Arbitration Rules and in the draft new SCC Arbitration Rules. He believed that the introduction of provisions that give power to the tribunal to determine applications for summary disposal of all or part of claims and defenses manifestly without legal merit or manifestly outside the tribunal's jurisdiction is timely, particularly when escalating time and costs associated with arbitration proceedings are increasingly the subject of criticism.

The Draft Rules include at Article 18 provisions on party representation that closely follow the 2013 IBA Guidelines apropos of which Mr. Winstanley noted that the LCIA's 2014 Arbitration Rules also include an Annex of "general guidelines for parties' legal representatives," which are backed by sanctions for violation of the guidelines similar to those proposed by the IBA.

Antonio Parra discussed Articles 16 and 17 (place and language of arbitration), 24 (arbitral jurisdiction), 28 and 33 (fees and expenses of the tribunal and costs of arbitration), 29 (applicable law and remedies) and 37 (confidentiality) of the Draft Rules, which follow the corresponding provisions of the 2014 ICDR Arbitration Rules, and incorporate several of the ICDR's unique features. For example, the Draft Rules provide that jurisdictional issues raised before the tribunal is constituted will not preclude the BCDR-AAA from proceeding with the case, and the tribunal will address such issues once constituted. Another important feature of the ICDR Arbitration Rules that is preserved in the Draft Rules is the provision on confidentiality, whereby, while the BCDR-AAA may not publish the full text of awards without the parties' consent, selected awards can be published provided they have been suitably redacted to protect confidentiality.

Among the drafting changes suggested by other major sets of arbitration rules, Mr. Parra noted the abandonment in the Draft Rules of the distinction between "the rules of law" and "the law" applicable to the substance of the dispute, seen in some arbitration rules, including those of the ICDR, in favor of "rules of law" throughout, so following the current ICC Arbitration Rules in this regard.

The Draft Rules also now take the more usual approach of referring to a Fee Schedule to determine the arbitrators' fees, instead of basing the determination on the arbitrators' "stated rate of compensation": the current approach, according to Professor Ziadé, having caused avoidable friction in some pending BCDR-AAA cases.

Ms. Menaker remarked that the draft rules are "state-of-the-art and reflect best practices," surely "a welcome contribution in the region." She particularly praised the straightforward drafting and avoidance of unnecessary cross references, making the Rules easy to understand and navigate, especially for infrequent users.  She also emphasized the numerous provisions throughout that highlight the emphasis on efficient, timely proceedings. Ms. Menaker further observed that it was unusual for arbitration rules to provide guidance on the issue of privilege, and welcomed the rule that, where the law applicable to counsel, the parties, or documents differs, the tribunal ought to apply the same rules regarding privilege to all parties, giving preference to the rule that provides the highest level of protection. Finally, she recommended that the BCDR-AAA revisit the drafting of the rule regarding waiver of the right to appeal, insofar as inclusion of the term "review" might be construed too broadly, as waiving, to the extent permissible, a party's ability to raise defenses to enforcement of the award.

Mr. Townsend commented that the Draft Rules incorporate the best elements of the recently-revised rules of the major arbitration institutions, with special emphasis on the 2014 revision to the ICDR Arbitration Rules, providing the BCDR-AAA with the most advanced and modern set of arbitration rules in the market. He recommended minor adjustments to tie the rules into the unique option available under the Bahrain arbitration law that allows parties to agree to conduct an arbitration in Bahrain, under the procedural law of a third country, giving the third country's national courts the sole jurisdiction to review the award, thus allowing parties to conduct an arbitration in a convenient location in the Middle East, under modern rules, with the award reviewable only by the courts of a country chosen by the parties.

Mr. Al Tamimi emphasized the BCDR-AAA's strong role in providing training and spreading awareness through its international events on arbitration and its first-rate legal periodical. He added that the BCDR-AAA's initiatives were more broadly encouraging the incorporation of arbitration clauses in contracts, including those using other regional arbitration centers.

Mr. Al Tamimi said that the Draft Rules incorporated the latest developments in arbitration and properly reflected the regional legal environment. They also minimized some of the challenges that arbitration proceedings face in the region, including the enforcement of local and international arbitration awards. Mr. Al Tamimi also noted that the US model of the ICDR Arbitration Rules had been amended, better to meet regional requirements. For example, the deposition and discovery rules had been amended to suit the local needs and to balance the civil and common law traditions.

Mr. Al Tamimi stressed the need for fast-track rules to settle lower value, less complex disputes, and he endorsed a mechanism allowing the enforcement of decisions issued in emergency arbitrations in the region.

Mr. Richard W. Naimark, Senior Vice President of the ICDR/AAA and member of the Board, provided concluding remarks.

The following are the comments of some of the participants at the meeting.

William K. Slate II commented: "The new draft arbitration rules of the BCDR-AAA developed by a sterling team of experts, and then vetted by countless practitioners and academics profoundly bespeak the thoughtful care devoted to the arbitration process by the Bahrain Chamber for Dispute Resolution. Indeed, the experience and substance of the development committee comprising Nassib Ziadé, Antonio Parra and Adrian Winstanley are unmatched by any other trio which could be assembled, and their shared results are fundamental, aware of the present, and anticipate the future."

Lord Goldsmith QC, Chair of European and Asian litigation at Debevoise & Plimpton LLP, commented: "The rise of regional centres around the world has greatly benefitted the practice of arbitration, and helped to promote it as an effective and efficient form of dispute resolution. The launch of the new draft arbitration rules from the Bahrain Chamber for Dispute Resolution continues that positive trend. A great deal of work has gone into them, and they point towards the modern and comprehensive approach being taken to the practice in the region. I wish the Chamber much success with the operation of the new rules."

Judd L. Kessler, Partner at Porter Wright Morris & Arthur LLP, Washington, DC, said: "As the trend in favor of regional arbitration centers grows, the Bahrain Chamber for Dispute Resolution stands out not only because of its distinguished leadership and close collaboration with the American Arbitration Association, but also because of its sterling record of resolving international disputes quickly, transparently and with evident respect for the rule of law--both national and international."

Alec Emmerson, former Head of the Dispute Resolution Group, Clyde & Co, Dubai, stated: "As the Gulf Region emerges and develops a significant collection of arbitration centres, it is important that those which should do well ensure that not only is their administration of cases timely and efficient but also that their rules are regularly reviewed and updated. I therefore applaud and welcome the new draft rules released by the BCDR-AAA and was delighted to attend the breakfast at the IBA in Washington when the proposed changes were introduced to leading arbitration specialists." 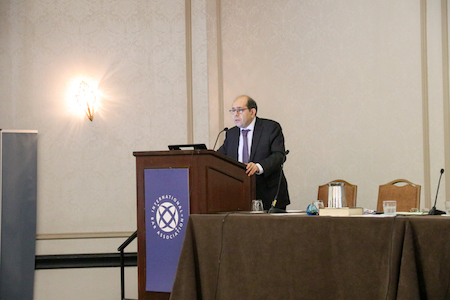 Nassib G. Ziadé during his presentation 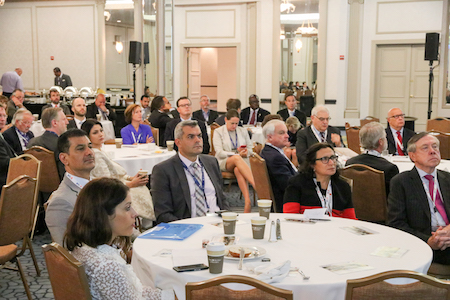 A view of some of the attendees at the breakfast meeting 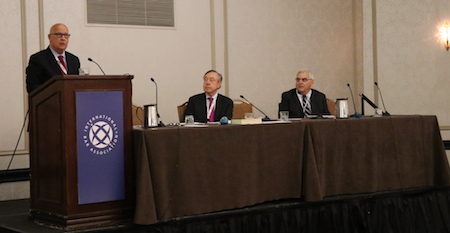 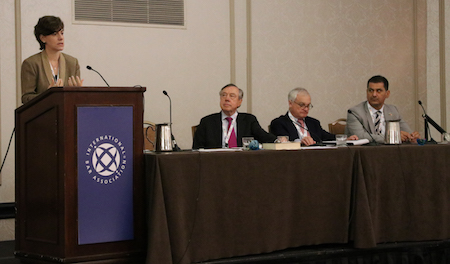