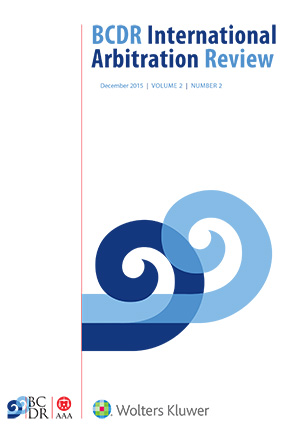 The General Editor of the Review, Professor Nassib G. Ziadé, is the CEO of the BCDR-AAA. The Review's Advisory Board includes leading practitioners and academics in the field of international arbitration. The Editorial Committee for the third issue was comprised of Djurdja Lazic, as Deputy General Editor, and Yousif Al Saif, Khaled Iqbal Chilwan, and J. Michael King, as members. The complete list of the Editorial Board can be viewed here.

The third issue includes eleven articles authored by fifteen prominent women in the field of international arbitration. It is the second of a two-part series that focuses on "Women's Voices in International Arbitration." The table of contents and abstracts of the third issue can be viewed here.

In his Foreword to the third issue, Professor Ziadé thanked the thirty-one women arbitrators and arbitration specialists who contributed to the two issues on "Women's Voices in International Arbitration." He promised to remain faithful to improving the representation of women in the field of international arbitration and the representation of nationals from emerging economies on arbitral tribunals, as well as to adopting stricter ethical rules in the arbitration field. He concluded:

I firmly believe that reforms in these three areas are inter-related, and that, if carried out properly, they will create a more diverse and fair system for the resolution of international disputes.